The eye contour is the most delicate zone of the face, and where the first signs of aging can be seen. The skin there is the least hydrated and contains less fat and sweaty glands, which makes it even more susceptible to external influences and aging. It is twice thinner compared to the rest of the skin on the face and as age progresses, it thins out even more.

The eye contour is one of the most mobile zones of the face. Every mimic and tension has a negative influence on its elasticity and shine.

In general, the changes in this zone are visible as a sagging of the skin in the zone of the upper eyelid, the appearance of wrinkles type “crow’s feet”, bags and swelling under or around the eyes. This changes make the face, in general, look tired and aged.

Plasma Beauty Technology (Plasma BT) uses a refined plasma technology for atmospheric pressure, and by doing so, encompasses a wide diapason of procedures, according to the individual needs of the patient.

Plasma is the fourth aggregate condition of matter after solid, liquid, and gas. It is a gas, which is ionized under high temperature and high electric energy.

Until recently, the surgical blepharoplasty was the only method for removing the excess skin on the upper and tightening of the lower eyelid. In Bulgaria, however, a perfectly new machine has appeared – Plasma Beauty Technology (Plasma BT) – a revolutionary patented technology, which opens new horizons and possibilities in aesthetic medicine. It is the first machine in the world which offers a combined use of the surgical and aesthetic capabilities of the plasma technology. Skin Line Clinic has the honor of introducing this innovation in the Bulgarian aesthetic market.

Plasma Beauty Technology (Plasma BT) works according to the principle of creation of a controlled plasmic microimpulse between the point of the needle and the patient’s skin. In this way, the generated low voltage arc sublimes the epidermis in a controlled way (the substances changes from solid directly in gas condition). It melts, and the focused head causes a biostimulation in the derma, aiming for a lifting effect. The therapy has a local effect, without harming the surrounding tissue.

Plasma Surgical ™  namely, can achieve a precise non-surgical correction of the eye contour. With the non-surgical blepharoplasty with Plasma Beauty Technology (Plasma BT) all risks associated with the traditional surgical option can be avoided – no cutting and removal of excess skin or fatty tissue, no modification of the orbicular muscle. The procedure is faster and safer than the traditional blepharoplasty. It is also a good option for patients, who don’t want to go through a classical surgery, but are good candidates for lifting of the eyelids. Additionally, it allows for an additional correction after the procedure, unlike the surgical blepharoplasty.

Plasma Surgical ™ has three work modes – single, pulsing, and uninterrupted shot, which can be changed depending on the therapy and the physician’s preferences. Each of these modes has four different powers. Currently, there is no other plasma device which offers such a wide choice of functions and powers

The technique for blepharoplasty by Plasma Surgical is defined as “dynamic”, as it doesn’t affect the movement of the eyelids during and immediately after the procedure.

Miniature crusts appear over the skin of the treated zone, which disappear in up to 10 days. In the first few days there is some swelling and patients experience some discomfort. Depending on the degree of swelling and the volume of excess skin 1 to 3 procedures can be done in an interval of 30 days, while the achieved final result lasts for up to 2 years

Plasma Surgical TM Before and After 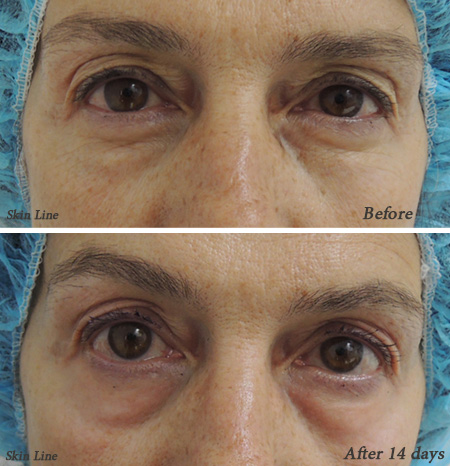 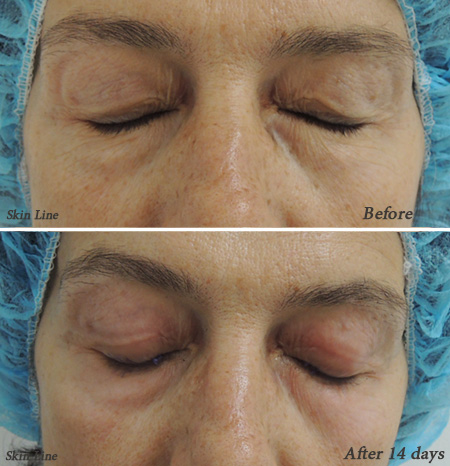 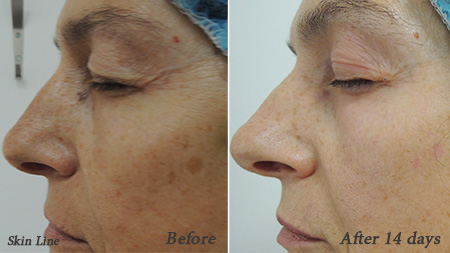 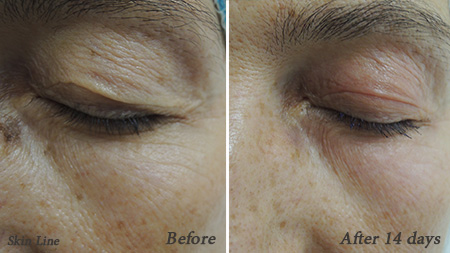 Plasma Shower™ is an application delivering fractioned voltaic plasma. It is a patented technology, the only one of its kind, using a low temperature atmospheric plasma, which creates a powerful sterilizing effect. This method is especially successful for treating active acne. Plasma Shower™ suppresses the effect of acne inflammation using bacterial sterilization and at the same time decreases the excessive production of oil /sebum/.
The fractioned voltaic plasma enables the temporary breakage of connections between cells, and in this way, facilitates the effective transdermal delivery /TDDS/ of different active substances in the skin. This patented method allows the plasma stream to temporarily weaken the molecules of cell adhesion, which allows a quick and effective absorption of active substances /voltaic mesotherapy/. Using TDDS, you can treat pigmentations using transdermal delivery of lightening and suppressing the tyrosinase products. This is how Plasma Shower™ causes lightening, regeneration, and vitalization of the skin. 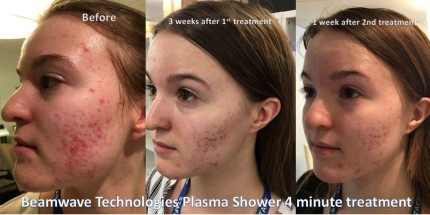 Depending on the energy, with which the therapies are done, the effects, intensity, and impact of the procedure changes. Done in the different layers of the derma, the therapies treat specific skin problems: 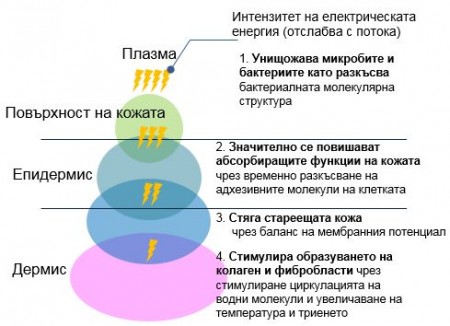 Tests conducted by the Munich university show that plasma is fatal for bacteria, while stimulating cells and helping the skin regeneration process. This makes it unique for use in different types of treatments and therapies, depending on the patient’s individual needs.

Are the procedures painful?

The procedures using Plasma Shower™ are painless, and when usingа Plasma Surgical™, a local anesthetic is used to bring the feeling of discomfort to a minimum.

When are the results seen?

The results after a procedure using Plasma Surgical™ ot Plasma Shower™ is not immediately visible, due to the recovery period necessary for the skin.

After treating acne, the skin appears much healthier, with a clearer and more even tan, but the complete effect can be seen after around 2-3 weeks, when the skin has recovered completely.

After treating the eye contour, the synthesis of new collagen and skin tightening happens step by step in a period of around 6 weeks.

All procedures are done after a preliminary free consultation with a doctor, who does the manipulation.

Nonsurgical blepharoplasty is done by